Another Halloween dessert idea! Because why have one dessert when you can have two desserts?! Am I right?!?

I’m not trying to say that I pick favorites or anything, but this Halloween dessert might be better than the first! But this one is chocolate! Chocolate is always going to win in my eyes!

This ooey-gooey, rich, chocolatey cauldron of deliciousness looks impressive but is actually pretty easy to make! These are essentially cupcake versions of a lava cake! A lava cake, for those who may not know, is a rich cake with a gooey center that pours out when you cut the cake! Since this dessert is a little different than most cakes, I do have some pointers!

Throughout the baking process, don’t forget that these are lava cakes, which means the center won’t be completely set! When you pull these out of the oven, the edges should be set and firm to the touch, but the middle will still be soft! If the middle is firm, then they have been overbaked! They would probably still be delicious, but not a lava cake!

Another thing that’s different about this recipe is the flour content! There’s not a lot of flour in this recipe! It only needs a little bit of flour to actually set up and create the foundation for the lava cake!

To make these in the holiday spirit, I baked mine in little mini cast iron dutch ovens! I wanted them to feel like a witch’s cauldron that was bubbling over! However, this recipe works perfectly in a cupcake tin! Just keep in mind, the bigger you make your lava cake, the cook times will be different!

I added these super cute little eyeball candies I found at the grocery store to really give it an extra spooky vibe! How spooktacular are these?!

1 cup of chocolate (a little more than four ounces)

Halloween toppings, optional (but are they really?)

In a microwave-safe bowl, add the chopped chocolate and the butter. Melt in thirty-second intervals, until the chocolate and butter are melted. Slowly, stir together until they are fully mixed. Add in the sugar and the eggs one at a time. Be sure to stir one egg completely into the batter before adding another egg. Then mix in the flour!

Take a cupcake tin, and liberally spray six of the cupcake tins. You could also use little ramekins or cute little mini cast irons like I used! Please note, if you use bigger ramekins, you’ll probably only get about three cakes, and the cooking time will be a little bit longer! Using a large cookie scoop, fill the batter about 2/3’s of the way full

Bake in a 400-degree oven, for about 10-15 minutes. The middle will be soft and jiggle slightly, but the edges should be puffed and firm to the touch!

Allow to cool slightly, before gently scooping the mini cakes out of the cupcake tin! You could either use a large spoon to help them out one at a time. Or place a baking rack under the cupcake tin and flip them over together. I suggest being as gentle as you can with these desserts because the middle is still incredibly soft in order to get the lava effect!

To complete the spooky cauldron look I was going for, I made a thick ganache to pour of the top!

Then pour the heavy cream over the lava cakes! I waited for the ganache to firm up for about 15 minutes before placing the eyeballs on top!

How fun are these?! I love the cute little Halloween touches without being too over the top!

The lava cakes are out of this world delicious! The middles are soft and gooey, and the edges are moist and chocolatey! These cakes would be perfect by themselves, with ice cream, or even better with this rich chocolate ganache drizzled over the top!

I made these for Halloween, but I have a feeling this might be a new staple in my kitchen! 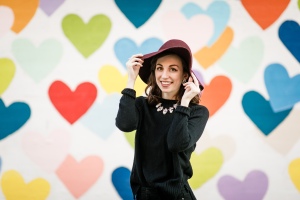 Welcome to my blog! I am a self-teaching home baker! I created this blog to share my love of baking while learning new recipes with fun tips and tricks! Stick around to see what you like!