I know what you’re thinking. Brussel sprouts are the worst! I believed that for a solid 24 years.

Here’s the thing: if you don’t like Brussel sprouts there’s a good chance it’s because you’re eating them wrong.

Are you steaming Brussel sprouts in the microwave?!? Stop! Stop right now! Throw those away and start fresh with this recipe!

There’s a totally scientific and smart way to explain what exactly happens to Brussel sprouts when you steam them, but I don’t remember all the words to explain it properly. But I do have my shortened version. Essentially, when you steam the Brussel sprouts they release their own form of “gas” so to speak, which produces a stinky smell. Not the most appetizing way to meet this green globed vegetable. In order to stop the Brussels from producing the smell, you have to hit them with a different form of heat than steam, so that would be roasting or a pan sear. Typically, you want to cook them pretty fast, so this recipe can be done in 10 minutes! Pretty impressive, right?

So if your mom ever served you a huge scoop of steamed Brussels that smelled like the sewer and squished under your fork, I get the fear of Brussels. My sister and I used to call them alien heads because they were so slimy.

But now that I know how to cook Brussel sprouts I would say they are one of my top five vegetables! Talk about a comeback!

Salt and pepper, to taste

Chop the Brussel sprouts in half and cut off the bottom stem.

In a large pan, add in two tablespoons of olive oil and turn to medium-high heat.

Add in the Brussel sprouts cut side down to get a nice crispy edge. Cover with a lid and cook for about 5 minutes.

Uncover and add in the garlic powder, butter, salt, and pepper. Stir gently and flip over.

Cover and cook for another 5 minutes.

The Brussel sprouts will be done when the edges are golden brown and crispy without turning soft.

To serve, top with a squeeze of lemon juice and grated parmesan.

Trust me, these aren’t the same Brussels from your childhood. These are crispy, lemony, cheesy, garlicky, and every other delicious adjective you can think of! They have a nice crispy outside while still retaining a crunchy center. There’s nothing worse than a soggy Brussel and you won’t find a single one in this dish! 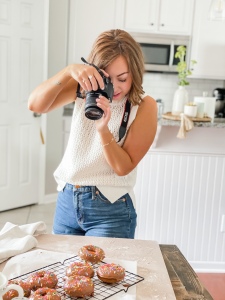 Welcome to my blog! I am a self-taught home baker! I created this blog to share my love of baking while learning new recipes with fun tips and tricks! Stick around to see what you like!